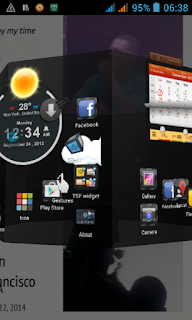 There are many android launchers out there in Google play store. The Golaunchers and co, are all good but there are others which are better, ones that wont hang when you activate the launcher it. Basically do the things launchers are made to do, help keep your Android phone neat, tidy and pleasing to the eyes.
Also a good launcher should be able to help a smartphone run smoothly, with good and compressed functionality, optimize the background pictures, not take up too much space… I could go on and on but the fact is there is no perfect Launcher, but you can definitely find something close. Third party Launchers that is close to perfect are available.
It took a while but I narrowed the field down to three. For a robust “free” option my choice might be everythingMe Launcher. If you want to get lost for a few hours in mindless non-productive tweaking this is a good solution.
The only negative of this for  is that it’s loaded withnon-intrusiveadware in form of suggested apps. if this adware where to be removed even if it is a paid version then this Launcher will be the best in the world.
Nova  Launcher. The paid version of this app is wow compared to most of everything else out there it’s more to taste with style in both in what it offers and how it works. The paid version goes for  $4.99, the free version is OK which also depends, it is infact the free version that will make you upgrade. To some people it is that good, so help the developers and pay.
Apex is well Apex, one of the best Launchers one can have around not only is this launcher good, with it crisp display, app drawer, backgrounds, good wallpapers and a very handy organizer, it also comes with other amazing features.
Over to you are there any other Launchers out there that you’ve used and found it good? If yes can share it with others.