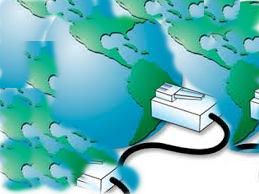 There are many Internet service providers in the world, majority of those are located right in the US, providing services based mainly on cable, DSL and dial-up services. Providing all round internet services for telephone, Desktop Computers & Laptops with such services as Wi-Fi.

What makes this internet providers thick is “services” they provide fast and almost 99% reliable internet services to consumers. Because they are not one their services varies, for example, one can have more speed compared to others while the price will be much higher, while another may have less speed but make it up with the price as the price will be lower.

Without much fuss here is the top 10 largest and popular internet service providers in the United States if not in the world. They are numbered from 1 to 10 (1 being the highest) in order of importance and popularity, while the depth of their services are factored in.

1. Comcast This is without doubt currently the largest cable provider in the U.S, with over 17 million internet customers at an amazing speed of up to 105 Mbps. It doesn’t stop there, Comcast also provides other features such as internet security and parental controls. A Comcast account come with 7 email accounts, with 10 MB/ea, this is limited. Plans start from $29.99 per month for 6 months.

2. AT&T Closely following Comcast is AT&T, they provide DSL and dial-up services, fiber optic connections with its U-Verse service, over 17 million subscribers enjoys speed up to 6.0 Mbps, also the U-Verse fiber optic delivers speeds up to 24 Mpbs with 10 email accounts, unlike Comcast AT&T has unlimited email storage. Dial-up start from $22.95 per month. While DSL starts at $14.95 per month. The U-Verse starts goes from $19.95 per month.

3. Time Warner Cable This internet provider has 14 million customers, with coverage of about 39 states in the United States. This company delivers its services via cable network, with speeds up to 50 Mbps. Its other service called the ” Road Runner” puts in speeds from 768 Kbps to 30 Mbps. Plans begins at $19.99 per month.

4. CenturyLink CenturyLink should perhaps be number 3, as their rapid rise was ochastrated by their acquisition of Qwest Communications, although they’ve gradually became the third largest telecommunications company in the U.S. With over 7 million subscribers using their Internet services. Services they provide include DSL and fiber optic services with speeds up to 40 Mbps. Plans begins at $14.95 per month.

5. Charter Charter is responsible for proving such internet services like Internet security, parental controls, and ten 1GB email accounts to over 5 million customers scattered in about 26 states in US with cable speeds up to 60 Mbps, plans begins at $19.99/month.

6. Verizon Verizon has some top States they cater for States like Texas, California, Florida and some other states, Its fiber optic service, which is called FiOS, is available too. Their services include but not limited to fiber optic, DSL, and dial-up. For DSL plans at 0.5 to 1 Mbps and include 9 email accounts with 10 MB of storage. FiOS has speeds of 15 to 50 Mbps. Dial-up is $14.99 per month. DSL begins at $29.99 per month. FiOS starts at $49.99 per month.

7. Cox Cox Internet services include cable internet which is the medium through which all their services are rendered to about 5 million customers in more than 16 states with speeds of 3 to 50 Mbps. . Along with 10 email addresses, security software, and customer support. Plans begins at $15.99 a month for 3 months.

8. Optimum Optimum provides cable Internet to a subscriber base of more than 3 million mainly in New York, and other Rocky States. speeds up to 50 Mpbs, along with five 2GB email accounts, security and parental controls, are what comes with a subscription while there are added bonus like 12GB site hosting. The Plan begins at $29.95 for 6 months.

New! List of Fastest Internet Providers in The US

9. Frontier True to its name Frontier is mainly focused in providing Internet access to people in rural areas with over 4 million keying in. Service is; DSL service, you get the luxuary of 8 email accounts, security and parental software, then call waiting if you subscribe, begins start at $14.99 a month.

10. Suddenlink With over 1.4 million subscribers in such big States like Texas and Louisiana, this broadband company deserves the hype and just like Frontier they are available in rural areas. The Suddenlink2GO is one amazing feature which can be used to watch TV and movie content from any computer across the U.S. Plans begins at $19.95/month.

Note Changes may occur in prices and prices may rise or lower depending on the company. The top 20 list is here meanwhile share!