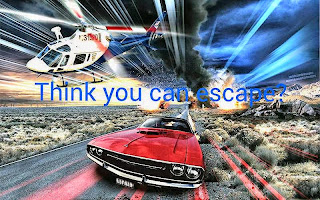 Can you really outrun the police even with a monster car? Well unless you’re wanted for capital murder or a life term in prison awaits you, I’ll suggest you stay put, do not ever engage the police on a high speed car chase.
Here are top reasons why escaping police chase is impossible, sorry almost impossible (there is still a way you still can)

1. Communication Every involved officer, as well as their supervisors and their supervisors’ supervisors, have radios, both in-car and portable on their person. I don’t think you can dial your cell phone and drive with one hand at top speed while you coordinate with accomplices down the road. The police have communication advantage, you don’t.

2. Collaboration. If a pursuit has been authorized, the longer it goes on the more police men it attracts. And if you stray toward the boundary of a jurisdiction (city limit, county border, etc), you’re going to get extra pursuers from other agencies, who may be even less restricted than your original pursuers.

3. Convergence. You can go in one direction at a time, but law enforcement response to your location will be omnidirectional. You’re going to have LEOs swarming your vehicle from 360 degrees and, and if the chase attracts a helicopter, you’ll be faced with three dimensional pursuit. You simply cannot go fast enough to counter this. Even if you were trying to elude one Highway Patrol in a super car, you’ve still got a lot of variables to overcome regarding inter-agency cooperation.

4. Contraptions Is solid rubber tyres present? Because if the Police gets a lock on your direction of flight, the next thing is to spike you, once spiked, you’re hosed. You’ll drive for a while, because spike strips are designed to puncture tires so they slowly deflate as opposed to blowing out. But once they’re flat, driving on them will make them disintegrate; then you’re driving on rims. You can make fourteen to twenty miles per hour on rims, plus the danger of your vehicle catching fire from the spraying sparks.

5. Concentration. I’ll take it you’re not used to driving like this. Even if you’ve driven fast before for a while, you surely had some distraction and backed off. Maybe it’s the car or some sound you got concerned about, maybe you caught a glint you thought might be a trooper’s windshield. Whatever distraction you had, it weakened your resolve and you slowed down.

You have no such luxury here. And while this a new experience, it is not for them. They’ve trained for this in training scenarios and have been involved in pursuits in the field. They run code multiple times a week. When one tires another one takes over.

6. Cognizance. Chances are you don’t know your flight path as well as your pursuers. The officers on your trail probably know every pothole and curbstone, every back alley and shortcut.

7. Conveyances Your chosen city of flight may have the oldest squad cars, but they have the distinct benefit of redundancy. Your escape car is precious, because there is only one. If a patrol car has a blowout, that unit will fall out and be replaced by another. I don’t think your vehicle can outrun and outlast an infinite number of responding unit vehicles especially if there is inter-agency involvement.

8. Control What is your flight plan – are you going to rely on top end speed on the open highway? Or are you going to try to lose responding officers in an intricate series of turns? You’ve got a tall order ahead either way.

First, if you’ve got something in your hands that can outperform Crown Vic and Charger interceptors you’re going to be easy to spot. Second, you’ve got people to worry about – if you bruise someone’s doors at double the speed limit, they’re probably going to call the police. Instant update to last known location and direction of travel, which allows triangulation if you managed to create space. You probably haven’t, though, because even with vehicles capable of impressive top speed, there comes a point where the vehicle is so functionally light you can no longer safely operate it in real world driving conditions. While you may maintain some semblance of distance between yourself and the point car, you’re very unlikely to be completely leaving them in your wake.

If you’re banking on turns, you’ll need to be focused. Stress has a tendency to get the better of your attempts at rational thought. Was that three lefts or four? This looks familiar, I’d better go the other way…was that a school crossing sign or a dead end sign? Is this Street continuous this far North? Which side of the tracks am I on? If this occurs your chase ends there. Either alive and handcuffed or dead, either way the Police must have you.